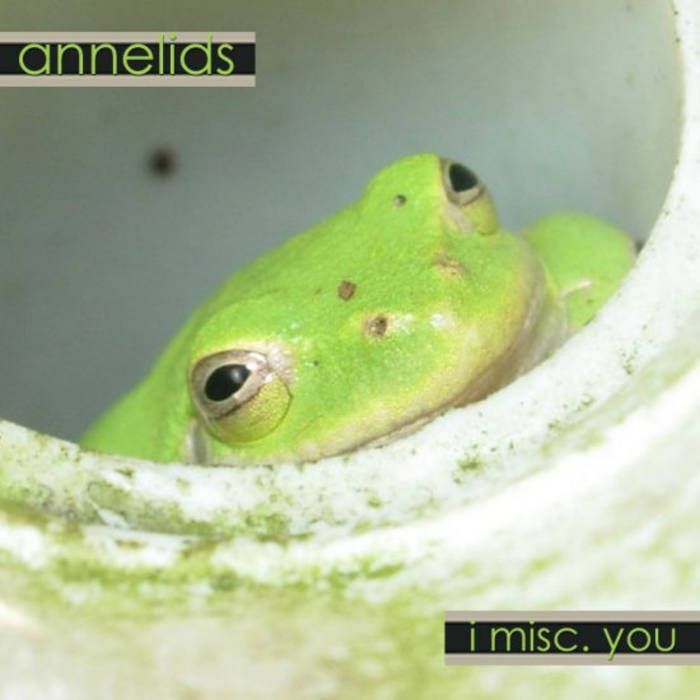 While my first two Annelids releases were both themed albums, I Misc. You is simply a collection of random/orphaned recordings from the past 4-5 years that I've compiled into an EP. Here are a few words about what led to the creation of these songs:

- Everything's Coming Up Malloy! was written and recorded on Dec. 11th, 2008 as a result of a challenge posed by my friend John to write a song based on this wikipedia article: en.wikipedia.org/wiki/Michael_Malloy. It's actually one of my favorite Annelids songs, and one of the first things I chose to perform live with this project.

- Hauling Sound was an unfinished outtake from my Binomial Nomenclature LP. It was actually one of the first songs I completed musically for the album, but I was never happy with my attempts at adding vocals to the track so it was eventually abandoned. I returned to the song three years later and finally finished it.

- Lasertime Forest was recorded as a test of the sensitivity of a new microphone I bought in early 2009. All the parts were recorded very softly from rather far away, using techniques like finger-desk-tapping-percussion, and unplugged-bass-with-its-headstock-pressed-against-the-wall-amplification. The loudest part of the recording was Hugo, just a kitten at the time, walking onto my desk and mewing.

- The Perfect Machine is from early 2011, and was also the result of experimenting with newly acquired recording equipment. I traded a combo amp for a looping pedal, and recorded all the parts in this song with voice and acoustic guitar through the pedal. It uses a set of lyrics that were originally written in 2008 and never found a home on Binomial Nomenclature.

- Valhall Awaits Me is a cover of an Amon Amarth song and was the proof-of-concept track for an EP of death metal covers I had planned to record. I recorded it in late 2011 and liked how the song came out, but ultimately lost interest in continuing with the entire EP.

- I Put on My Robe and Wizard Hat was written and recorded on March 17th, 2012 after finding the opening mandolin riff in a folder of unused ideas while compiling the songs for this EP.

Bandcamp Daily  your guide to the world of Bandcamp